This work is licenced under a Creative Commons Licence.

There are so many demands on our lives to be
elsewhere.

On Wednesday I was at a Lenten Quiet Day.
I nearly bowed out.
I had been debating whether or not to go, other places, people, situations pulled at me.
I struggled I still felt I should be elsewhere, but I went.

I felt like I was in a wilderness place not of my choosing, so I hid with paper and glue and coloured pencils.
I played with them partly for distraction, as I thought of other places, other people and guilt tried to take hold.
I prayed and tore paper;
I read, prayed some more and shuffled and glued paper;
I prayed as I ate in silence, the hum of those chatting in the noisy room accompanying the crunches of my listening.
I stuck paper on paper and prayed.
I copied words, wrote my own words, and prayed and listened into the silence.
I took the pencils and made marks,
hundreds of marks,
as I prayed and listened yet more.
For a day I wrestled with why I was there, there in the wilderness rather than elsewhere.

Then I took the once bread, now Body, in my hands and joined with God and in that moment heard,
Jesus too was broken.
I took the cup and felt the liquid warm my soul,
Jesus came to heal.
Jesus couldn’t be in all places.
Even Jesus when he walked this earth had to make decisions as to where to go, when.
Although part of me stilled wished I could have been elsewhere,
a bigger part,
the part God inhabited knew I was in the place God wanted me to be.

Nothing changed or fell apart or failed to happen because I spent Wednesday wrestling with God rather than being elsewhere.
I am but dust and to dust I will return,
but dust or flesh I am Beloved of God,
nothing can change that.

I could have been elsewhere on Wednesday, …

Pay attention.
Be astonished.
Tell about it.

Head down, thumping the keys on the computer, worrying about getting all things done.

Pay attention… the trees are changing, buds are forming, little signs of green and yellow, the wind is moving them and the sunlight is making silver flashes here and there. Stop for a moment to watch, to pay attention to what is around me outside. Stop and breathe more deeply. Stop and drop my shoulders, sit back, let the tension go.

Another day, another to-do list, another phone call to add to all the rest of stuff to do.

Be astonished… a painting on my desk catches my eye, of Mary and Martha, a reminder to be more like Mary but the painting focuses on the things Martha has to work with, food to get ready, hospitality to be offered, and I wonder how much freedom a working woman has to make the right choices.

Things to ponder in Lent, books to read, prayers to pray, confessions made, alms given.

Tell about it… when you have nothing how easy is it to sit and contemplate, to listen to holy things, to not fret about what you have to do? When you are working three jobs to make ends meet, how can you find time to sit and just ‘be’ let alone get to church? I know it is a parable, a story to astonish us. But it seems so unfair to ask this of men and women who have no time but struggle every day just to exist. Tell that story. 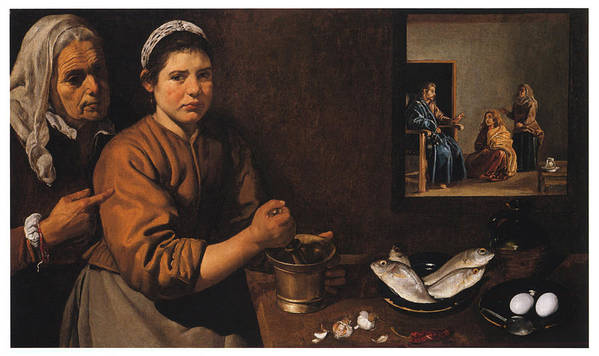 Diego Velazquez, Christ in the House of Martha and Mary, 1618

I was sitting in the hospital waiting room surrounded by dozens of people all waiting and listening for their name to be called. Some were reading, some scrolling through things on their phone, some flicking through old magazines, some just sitting and waiting and listening. Look at their faces… wrinkled frowns, worried looks, mouths down-turned, eyes focused on the desk where the nurse or doctor will appear and call their name. Heads tilted to hear the voice, anxious not to miss it.

It occurred to me that I don’t listen enough. In the morning the radio goes on and stays on all day. In the car music or words accompany me on my journeys. I get bored so I phone someone for a blether. My prayer book tells me silence should be left here and I pay it little heed. I count to ten. Will that be enough for the introverts? It’s Lent so I’ll make it twenty.

And I remembered a poem prayer I once read. But what was it called and who wrote it? And I found it in my Quotes Journal and I read it and switched off the radio and listened. Today I remembered that peace can be mine if I just listen. I might hear my name called. You are my beloved child.

Down near the bottom
of the crossed-out list
of things you have to do today,

between ‘green thread’
and ‘broccoli’ you find
that you have pencilled ‘sunlight’.

Resting on the page, the word
is as beautiful, it touches you
as if you had a friend

and sunlight were a present
he had sent you from some place distant
as this morning – to cheer you up,

and to remind you that,
among your duties, pleasure
is a thing,

that also needs accomplishing
Do you remember?
that time and light are kinds
of love, and love
is no less practical
than a coffee grinder

or safe spare tyre?
Tomorrow you may be utterly
without a clue

but today you get a telegram,
from the heart in exile
proclaiming that the kingdom

still exists,
the king and queen alive,
still speaking to their children,

to any one among them
who can find the time,
to sit out in the sun and listen.

“All you need at this time of Lent is stamina,” sayeth Bishop Kevin to me this morning. And he’s right. We are into the fifth week of Lent and it is about this time that we might be wearying. Whatever we gave up or took on is starting to take its toll. One of my little flock committed to coming to Morning Prayer every day in Lent. “We don’t have it next week, though?” she asked, a little hopefully I thought. “Oh yes we do,” sayeth I. And I saw her face fall. “It seems to be longer than six weeks I’ve been getting up early.”

Some have already fallen by the wayside. No alcohol has become no alcohol during the week. Unlikely Feast days have been sought to break the fast. But why is it important to keep on going? To not cheat? To keep on living out the promises we may to God and ourselves on Ash Wednesday? I mean, my little offering doesn’t make much difference in the grand scheme of things. Nobody will notice if I don’t keep up with my Lenten discipline.

Well, let me share with you a Jewish story…

Once upon a time in the old country, there was a town in a wine-producing region of Eastern Europe. The villagers in this region heard that a very famous rabbi was going to be on a grand tour early the following year and would be passing through their town. So they called a town meeting and said, “We must have some kind of great celebration in the rabbi’s honour.”

Then one of the villagers suggested, “Since we all make wine, wouldn’t it be wonderful if we had some kind of wine festival where we tasted the very best of wine?”

And then someone countered, “But each family only  makes a little wine each year. A big celebration would use up one family’s entire supply of wine for a year.”

So they devised a plan. They put a big oak barrel in the centre of the town, and every week, just before Shabbat, every household was to bring a small pitcher of wine and pour it into the cask. Then, by the end of the six months, they would have a great cask of wine.

But in one of the village families, the husband went home and he said to his wife, “Listen, you know that everyone is going to be bringing wine, and we are not a rich family. There’s going to be so much wine in that cask, ours certainly will make no difference. Why don’t we just fill our pitcher up with water? When I take it to the cask, I’ll pour it in right at the lip – I guarantee that no one will see.” And that’s what he did, every week.

Six month’s later the big day arrived. They set up a stand in the centre of town and put the cask on top of it. Right on schedule, the famous rabbi appeared. The townspeople were all proud of their village, their wine, and the rabbi. They presented him with a beautiful, ceremonial kiddish cup to taste the wine and inaugurate the celebration. He put the lovely cup underneath the spigot, filled it up, and lifted it high.

Suddenly there was a gasp from the crowd: his cup was filled to the brim with water.

from Because God Loves Stories edited by Steve Zeitlin

Feeling the tug at his elbow, he moved forward. His heart pounding hard, he stood there, hesitating on the threshold of the cathedral sanctuary.

“Come on!” Looking up to see where the voice came from, he caught a glimpse of a figure darting through the doorway opposite him.

He closed his eyes and leaped forwards,  plunging into the darkness. Eyes squeezed tight shut, he could smell the tang of sea air. Gentle fingers of breeze eased their way across his forehead. Counting to ten, he opened his eyes and gasped. It was the most beautiful sight to behold. Inches before his eyes a shimmering wall of water danced its way downwards, light sparkling and gleaming like bright jewels in the sun. Stepping sideways from behind the cascading wall of water, he climbed down and onto the hot sand. Eyes darting to and fro, he thought he heard the sound of laughter and singing. Or was that the waterfall? Then silence.

“Who are you?” he asked. No response. After wandering around for what seemed like an age, a tingle of fear crackled down his spine. The view was stunning and the breeze welcoming. But he realised that there was no sound. It was though the world was mute; he was mute. Rocks that should be home to puffins, herons, ducks, geese- all were empty. No birds sang from the trees or bushes. No music being played by the wind.

“Who are you?” He called out again into the shimmering horizon. “Why have you lead me here?” Silence.

Sitting on the edge of a steep cliff, he put his head into his hands. Without warning, thoughts and memories trickled into his mind, slowly at first, then faster and faster, beginning like snowflakes; building into an avalanche of the past. The weight of it was unbearable. Looking around him, there was nothing but the silence.

Then it came to him. That soft and gentle voice, caressing and soothing.

“Be patient, my beloved. Do not be afraid, for I am with you. Be patient.”

The young man shivered uncontrollably in the hot sunshine. He could wait. He must wait.

And he began to pray.