This work is licenced under a Creative Commons Licence. 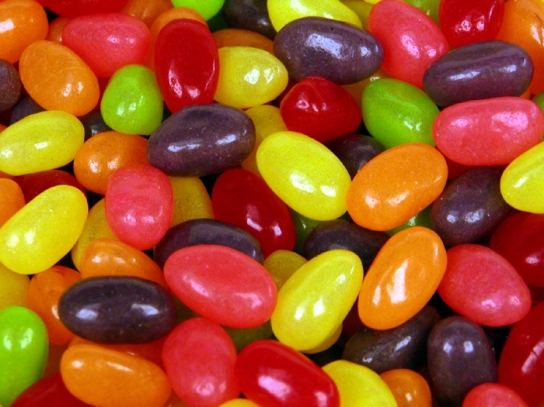 It was my turn to lead the Lent study group. As I said before our theme this year is food. I decided to base a parable on jelly beans. So hundreds of shining beans were scattered over the table. I handed out tools – ovengloves, a teaspoon, one sweetcorn prong, a pair of sweetcorn prongs and some kitchen tongs. The remainder of the people were told that they could ony use one hand to gather jelly beans one at a time. So a mighty scramble ensued.

Those with their hands gathered hundreds, the teaspoon and spike users tens; and the tong users and oven glove users struggled. Then those with wealth were told they could donate up to 10% of their wealth to those less well off. This was done, especially since there was such a disparity of wealth.

Then my first bombshell – those with tools were told to pay for those tools to those with wealth. Even if those tools were less than useful to the users. Then again the rich could donate to the poor, again up to 10%.

THen a final reveal – the “donated” jelly beans were to be paid back to the donors with 50% interest. This of course left the poorest with even less and the richest with even more.

It was a simple game but provoked discussion about the meanings in the game – inappropriate technologies sold to developing countries, arms sales and the need for Jubilee debt relief. A simple game with global meanings.